A Virtual Baby Shower Fit for a Stork 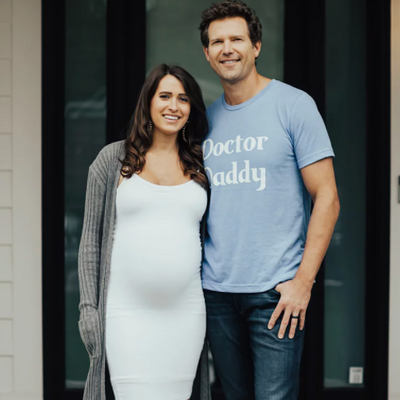 Recently, we had the privilege of throwing a virtual baby shower for Dr. Travis Stork from CBS's The Doctors, and his wife Parris. Originally we had planned the shower in person, but shifted our plans when safer-at-home due to COVID-19 was enacted and it was still a wonderful celebration!

The baby shower was also covered in People Magazine, excerpt below.

When it came to celebrating the impending birth of their son, The Doctors host Travis Stork and his wife Parris marked the occasion much differently than they had expected to.

"We did a baby shower Zoom call!" Parris, who has been wed to Travis since August of last year, tells PEOPLE of how their plans changed given the novel coronavirus (COVID-19) pandemic.

"We had an L.A. shower planned for March and that was going to be our West Coast friends and I had a Nashville shower planned too," she adds. "Obviously both of those got canceled. So it was just the two of us. But it was nice to have Travis be a part of it!"

But a change of plans did nothing to dim the couple's excitement about their new arrival: a son they'll name Grayson, due June 11. "I'm pumped to be a dad," says Travis, 48, who is also a member of the PEOPLE Health Squad and starred as The Bachelor during season 8 in 2006.

"More than anything, I'm just really excited to meet him and am hoping for a healthy baby boy and a healthy Parris in June," he adds.

Still, Parris admits that "it's a weird time" to be pregnant. "But I feel very fortunate to be married to a doctor. He's a calming presence for me," notes the attorney and mom-to-be, 27.

What's more, the couple's new Nashville, Tennessee, home is all ready for baby. "It's very animal-themed," says Parris. "It's a bunch of woodland creatures. Blue is my favorite color."

Adds Travis, "We have a jogger, bike carrier and baby backpack all ready to go as soon as he's old enough. I'm excited for Grayson to be a part of the many adventures to come!"

"More than anything, I'm just really excited to meet him and am hoping for a healthy baby boy and a healthy Parris in June," he adds.

Stork and Parris tied the knot during an intimate Nashville ceremony on Aug. 3. For the occasion, the bride wore a romantic off-the-shoulder Rue de Seine gown, while Stork accessorized his own casual ensemble with a pair of eye-catching orange Puma sneakers.

They announced their happy pregnancy news in December alongside a series of maternity photos, where they each wore a T-shirt applicable to the occasion. For Parris, it read, "Baby Belly!" while Stork's said, "Beer Belly!"