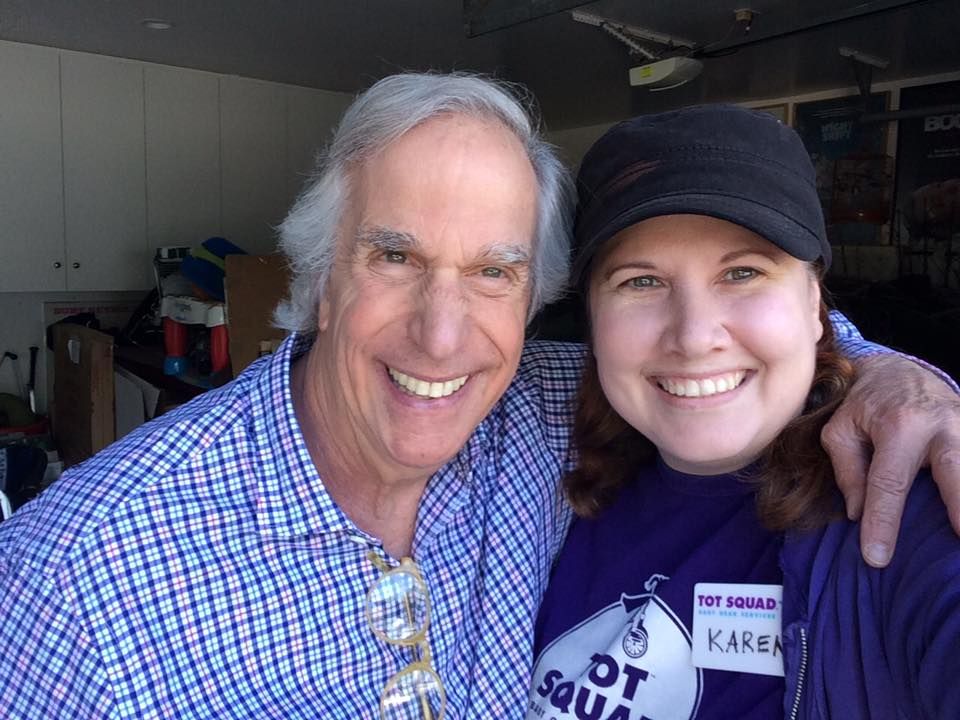 Karen Brundage isn’t just one of Tot Squad’s super heroes. She’s a super heroine with stripes on her cape. This month, she is celebrating six years with Tot Squad, first as a field technician and currently as a field supervisor. Aside from making grimy baby gear look new, the beauty of Karen’s job is her ability to simultaneously pursue her dream of acting.

Karen started with Tot Squad in 2013 as a temp but after only one shift was hired part-time as a cleaning tech. A year after being hired, she went through the four-day course to become a certified child passenger safety technician (CPST).

“It was kind of stressful in the beginning. My very first solo installation out at an event was like a 1960s, some odd Volvo, with lap belts only, the seats popped out and I was like, great! That’s my very first install. This is gonna go well. But eventually I got comfortable with it and I like the teaching. I like teaching parents how to do it because it’s very gratifying when parents can have a lesson with me and feel really good about doing an install on their own.”

Looking back, she’s very happy she became certified, even after encountering some car seat checks that might make someone else want to check out. During her first real installation at her certification test, she remembers “two cars, older cars, six or seven kids between the two cars, some expired car seats and one child should have been in a booster seat but was not. So we not only had to help them get two or three new seats but also figure out how to fit all of these seats into these two cars.”

Karen occasionally has to figure things out on the spot so her training as an improviser has come in handy. She remembers redoing a forward-facing installation that the mom said was originally done by a firefighter, surprisingly one of the worst installs she’s ever seen.

“He had taken the tether and wrapped it around the seat and attached it to this little thin wire… and I was trying to mask my horror… and she was already freaked out enough and I was just trying to calm her down, you know, poker face.”

Putting on a different face, or mask or costume doesn’t give Karen stage fright at all. Acting is her dream and part of the reason she’s happy to clean crusty car seats or sticky strollers to pay the bills. She’s had at most seven jobs and at one point or another worked in PR, as an administrative assistant, a waiter for a catering company, a freelance writer and helping create silhouettes or shadow portraits for an artist at special events. (If you didn’t know that was a thing, we’ve checked and it is. There’s even a top 10 list of best silhouette artists in Los Angeles.) But she’s extremely grateful to Tot Squad for giving her a good job, a company vehicle and the freedom to go after the thing she loves the most.

“One of the things I like about the job is the flexibility, the fact that I am pursuing acting, as most people are in L.A. and the company is incredibly supportive of that and totally on-board. If an audition comes up, I have the luxury to be able to go and do it with the full support of my company which is really nice.”

The opposite of nice is what you might call some of the baby gear Karen has tackled. She remembers one stroller that was covered in mold top to bottom, just so bad and even if she brought it home and worked on it for hours, it probably still wouldn’t come clean, so she was honest with the couple. The dad promptly walked over to the dumpster and put the stroller in it. That’s not often the case. Normally, Karen’s customers walk in with very dirty and battered baby gear and walk out with it looking crisp and clean.

“I’ve seen it all and I’ve cleaned it all,” she says. “I guess people would look at this job and go ‘Eww, my God, that’s so disgusting, how can you do that?’ But there’s a certain satisfaction especially when you’ve taken something really dirty and you’ve made it look so good and the parents come and they’re like, ‘Oh my God! It looks brand new! It looks so great!’ There’s kind of satisfaction to that.”

Karen also maintains a sense of humor on the job. She recalls doing two safety schools (installations) at once because she was double booked. The parents learned not only how to install their own car seat but also how to install the strangers’ seat. She's also had her fair share of fun helping celebrity parents - and grandparents - with their baby gear.

Karen is grateful to be able to help parents and entertain people on the side. She will be in the pilot episode of “The Politician” coming up on Netflix, in which she acts alongside Jessica Lange and was directed by Ryan Murphy. She also enjoyed playing Mrs. van Daan in The Diary of Ann Frank at Conejo Players Theatre in Thousand Oaks. People still recognize Karen for the part she played in an episode Criminal Minds. We at Tot Squad recognize her for her strong work ethic, kind heart and six years of company service.