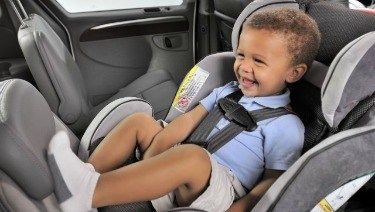 The United States could do a lot more to make car travel safer for children and easier on parents.

Unfortunately, as with many other areas, regulations often don’t fully line up with research.

In 2011, the American Academy of Pediatrics (A.A.P.) released a policy statement on car safety that recommended that children ride in rear-facing car seats until at least age 2. Before that, the recommendation was until 1. This change caused something of an internet firestorm.

It’s not terribly hard to get small babies into an American-style rear-facing car seat, but those who are nearly 2 years old are a different story. They often resist. They can fight. It can be miserable for both parties.

The authors of the A.A.P. guideline seemed on solid ground. They relied heavily on a 2007 study in the journal Injury Prevention that extracted data from the National Highway Traffic Safety Administration’s car crash database from 1988 through 2003. They found that children from newborn to 23 months who were restrained in a front-facing car seat were 76 percent more likely to be seriously injured than children in a rear-facing seat. In side crashes, serious injury was four and a half times more likely.

People paid attention. When asked, more than 60 percent of parents said they were complying with the new recommendations. (Obviously, that also meant many weren’t.)

Then in 2016, a biostatistician hired as an expert witness in a lawsuit against a car seat manufacturer tried to replicate the 2007 study. She couldn’t get the numbers to work. She contacted the journal, which contacted the study authors. They realized they had made a mistake with survey weights that, when corrected, made the results no longer significant. The paper was retracted.

The authors, to their credit, went back to work on a new study, with corrected methods. Because time had passed, they could now look at data on car crashes from 1988 through 2015. They were able to include more than 1,100 children from zero to 23 months who were in accidents.

Of these children, 47 sustained significant injuries in the crashes, and only 17 of those were between 1 and 2 years old. From these rare instances, they could not detect any statistically significant differences between children who had been in front- or rear-facing car seats. The researchers concluded, “Field data are too limited to serve as a strong statistical basis for these recommendations.”

This has left people once again debating whether parents in the United States need to keep wrestling children into rear-facing car seats all the way until age 2. The researchers, and the American Academy of Pediatrics, give an emphatic yes, pointing to laboratory “sled tests” on crash dummies and accident data from elsewhere — Sweden.

But focusing on this small age range misses the more useful lessons from this case of corrected science, which is that the United States could do a lot more to make roads safer for children and easier on parents.

How do Swedish parents manage this? For one thing, rear-facing car seats in Sweden and other parts of Europe are different from those here. They are often built with a bar that comes down from the car seat to rest on the floor of the car. This allows the seat to rest farther from the back of the car’s rear seat, giving the child much more room. Parents in Sweden find it easier to get bigger children into them. Such seats, which are not available in the United States, were also found to be safer in the sled tests than the versions we use.

But rear-facing car seats for older children are just one of the many differences between the United States and Sweden.

Because accidents are inevitable, Swedish regulations aim to make them nonlethal. Roads rely more on roundabouts, less on intersections. Cars are not allowed to turn at all when pedestrians are crossing. There are national camera enforcement policies. Sweden also focuses on pedestrian bridges, and separates cars from bicycles and oncoming traffic.

Far fewer people drive under the influence of alcohol; stricter policing has reduced impaired driving to less than 0.25 percent of tested drivers vs. about 1.5 percent of American drivers. (Sweden also has a more stringent definition of driving under the influence, 0.02 percent vs. 0.08 percent.) The speed limit in areas where cars might come into contact with pedestrians (think all of New York City) is less than 20 m.p.h. Speed bumps and other traffic-calming interventions are common. The average cost of obtaining a driver’s license is the equivalent of more than $1,800.

All of this seems to work. Over the last 20 years, Sweden reduced pedestrian deaths by 31 percent and overall traffic deaths by 45 percent. In 2013, Sweden’s rate of death from car accidents was about 3 per 100,000 people, about one-quarter the rate in the United States. But Swedes are not necessarily satisfied with that. They have bought into a program known as “Vision Zero,” which is summarized in one sentence: “No loss of life is acceptable.”

If America really wanted to get serious about reducing deaths on the road, especially those of children, a lot could be learned from Sweden. Doing so would mean adopting many significant changes: to roads, to laws and to car seats — namely, using the Swedish-style rear-facing ones until children reach 4.

Dr. Marilyn Bull, a pediatrician at Indiana University School of Medicineand an author of the retracted and resubmitted paper, discussed the state of the latest research and mentioned Road to Zero, a U.S. federal program begun in 2016 that aims to eliminate traffic deaths by 2050.

“The best we can do right now is to keep children rear facing in car safety seats to the highest weight or height allowed by the seat’s manufacturer,” she said. “Our ‘Road to Zero’ deaths on U.S. highways, though, will require us to advocate for support of improved data collection, continued research, as well as regulatory change and design innovation to allow even larger children to ride rear facing.”

As she suggests, setting more toddlers into rear-facing American-style car seats is advisable for making children safer, but it’s only a start.